If you are an infant born to an African American mother in Georgia (also Mississippi or Alabama) your chances of making it past the first year are worse than that of an infant born in Syria. China and Venezuela also have lower infant mortality rates than the 12.5 deaths per 1,000 infants that the Kaiser Family Foundation reports for Georgia.

If you’re eligible to vote in the upcoming Georgia election on November 6, 2018, this is a PSA to: 1) vote, and 2) vote for candidates that can change the healthcare disparities impacting expecting mothers and their children.

I delved into these statistics after reading this Atlantic article and was stunned, saddened, outraged. The popular reports of life in Syria and Venezuela paint those countries as war zones, places in the throes of chaos, places where the healthcare system has collapsed and failed the most vulnerable. Coincidentally, the infant mortality rate for Black children in Georgia (the state) is identical to the overall rate of Georgia the country (12.9  deaths / 1,000) — and the democratic institutions of the two Georgias may be in similar shape. Georgia the country is making strides towards full democracy.

You might say that I’m comparing disparate populations — Black people in Georgia vs the overall population of Syria. Would you agree that a comparison of Caribbean nations to the U.S. Black populations is reasonable? All of these islands have significant African diaspora populations — equalling or exceeding the Black population of the state of Georgia. Many of the current Black inhabits of the U.S. claim Caribbean ancestry. Let’s then compare Georgia’s infant mortality with that of the most populous Caribbean countries and Puerto Rico (a U.S. territory). 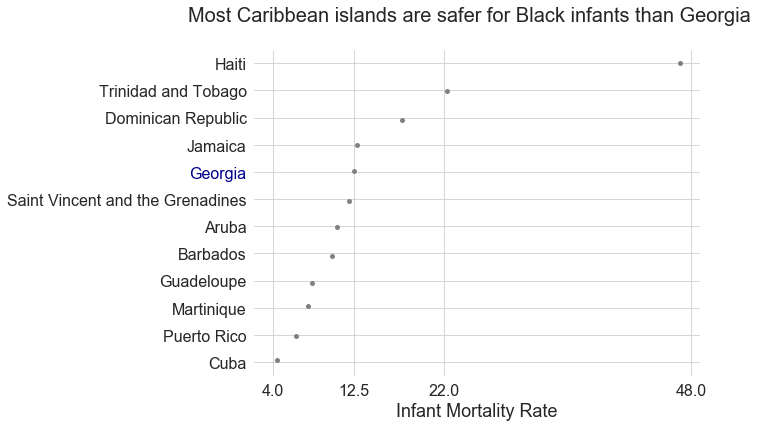 These figures are from the Kaiser Family Foundation table cited earlier and the CIA infant mortality rankings. The United Nations and CDC keep similar statistics.

The overall impact of Georgia’s health policies — the defunding of rural health, unaddressed racial disparities, the refusal to support medicaid expansion among them — are richly detailed in this report When the State Fails: Maternal Mortality & Racial Disparity in Georgia. The results of these policies have been devastating  — a perfect storm on the life expectancy of Black women and children, and also upon those of rural Georgians of all races and ethnicities.

What can be done?